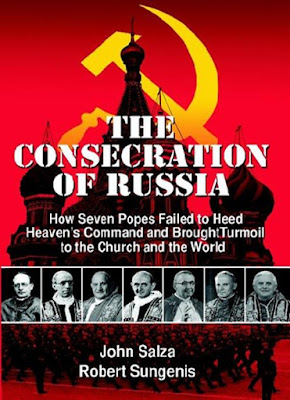 
In 1929, Our Lady of Fatima commanded the Pope to consecrate Russia to Her Immaculate Heart in union with all the bishops of the world for the conversion of Russia and world peace. On June 26, 2000, the Vatican Secretary of State issued a document claiming that Pope John Paul II’s consecration of the world in 1984 finally satisfied Our Lady’s command. Conducting a thorough examination of historical facts (1917 to present), Catholic apologists John Salza and Robert Sungenis reveal the absurdity of the Vatican Secretary of State’s position. In this one-of-a-kind exposè, Salza and Sungenis prove that some of the highest officials in the Vatican have lied to the world, not only about the Consecration of Russia, but also about the Third Secret of Fatima which predicts an apostasy in the Catholic Church in our times, starting with the upper hierarchy. This book will stir the hearts of the faithful and explain how the tragic failure of seven Popes to heed Our Lady’s command has brought turmoil to the Church and the world. As Jesus warned, “They will repent and do it, but it will be late.”